Is the Big Bad Wolf Bad? 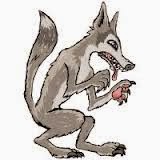 Is the wolf good or bad? Read the arguments and decide.

I believe the wolf off the Three Little Pigs is the most kindest loveliest wolf I've ever met in my life. I know people report that the wolf is big and bad but that is a lie!
First he wanted to have some fresh air out in the woods and then he saw a little girl and he wanted to play with the girl. The girl thought the wolf was big and bad. Well he is big but not bad! You must believe me!! He just wanted to play. Oh the poor old innocent wolf. He gets blamed for everything.
Second he had a really bad cold He wanted a friend to help him. If I was the Three Little Pigs I would help him wouldn't you? Anyway he sneezed and sneezed achoo achoo. That's what he was doing and he accidentally blew the Three Little Pigs house over and they were cruel to him! The Three Little Pigs are so sinister I feel like blowing their house on purpose. I hope this is the last time I have to report about the wolf getting into trouble.
It all happens when the wolf is bored. So the wolf went to the goats house and the goats were being mean to him when he was trying to make friends but the little goats thought the same thing that the little girl thought too.
The wolf is poor and innocent. That must prove to you that he is innocent.
Author Bailey

I believe that the big bad wolf is the biggest baddest wolf in the universe. You must trust me he is the biggest baddest wolf in the universe,
Firstly the wolf will eat anything that he sees even a person. He is like a killing machine. He shreds your flesh rips your eye balls to bits and pieces and will rip your belly open and eat your guts and shed your head off. You must agree that he is big and bad.
Secondly the wolf locked up that poor poor Grandma in a closet and tricked Little Red Riding Hood that the Big Bad Wolf was the Grandma. Do you think it is really bad to trick Little Red Riding Hood?
You must trust me now he is truly bad. Now did I convince you that the Big Bad Wolf is bad?
Author Czar

You must agree the Big Bad Wolf is the most tallest and the most diabolical wolf in the entire WORLD!
Firstly he eats the six goats and he has a disgraceful plan. He didn't stop thinking about it until he was able to rip the flesh off the goats bellies.
Secondly he tried to eat Grandma and Little Red. Snap! Snap! Snap! He eats Little Red Riding Hood and Grandma in one gulp. He didn't even chew on them! He was greedy he didn't need the humans in his fury over weighted belly. He only needed one small rabbit to eat.
Thirdly he blows the piglets houses down that they were happily building. "I'm going to devour you piglets come out and fight me like your father" said the wolf. "Oh its on! I'm going to smash you and make you into a diaper sandwich" said the Big Bad Wolf. Would you play with this wolf?
In conclusion you must believe that Wolf is sinister and really really really evil. Do you think he is diabolical?
Author George

You must believe that the Big Bad Wolf is a really abusive person. He trespasses and goes on other peoples properties.
You must believe me now the Big Bad Wolf eats anything he comes across. He's a greedy wolf because he gorges more than he needs. Horribly he rips the flesh off innocent little animals and makes them die slowly and painfully.
The terrifying wolf eats because he wants to hurt people not because he is hungry.
The extremely bad wolf suffocates grandmas. He eats innocent defenseless baby goats. Little Red Riding Hood was murdered by the extremely bad wolf. Do you think it is alright he went into somebody's house and killed them?
This is why the wolf is guilty of these revolting crimes and this proves he is extremely bad.
Author Faith

I believe the amazing, fantastic, fascinating wolf is not an evil guy. He is a wolf who has to do what he needs to do!
Firstly he was just trying to get a friend because most of his friends have died except Bob who is in China. Actually he is just getting a friend! He wanted to explain to mother goat  how he messed it up but she said "Bye! Nasty Wolf!"
Achoo. He asked the Three Little Pigs if they can look after him but they said "NO". Achoo. He didn't mean to blow down their house.
Will you agree now he is just good.
Author Toby

The pig is good. The wolf is bad. The wolf gets an axe and goes and kills the pig and that's why I believe he's the most vicious thing in the world.
He assassinates living things.

Lastly the Bad Bad Wolf crushes naans bones at the retirement centre.
It goes like this: cr cr cr cr crack! ccccccccccccccccc crack crack!
He scratches old poor innocent peoples heads off.
He locks grandmas in cupboards to suffocate. You must agree that the Big Bad Wolf is malicious.

If you wont believe me you might die in pain. The Big Bad Wolf will kill you!
Author Jerome

Which piece of writing convinced you?
Is the wolf good or bad?