We used the dress ups to create a character. Room 8 was buzzing with laughter and creativity. 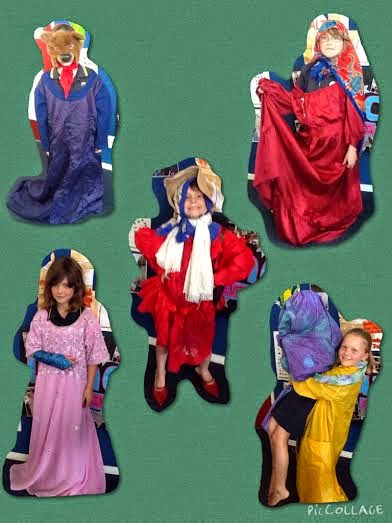 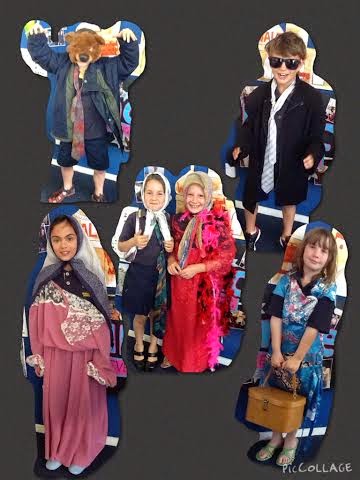 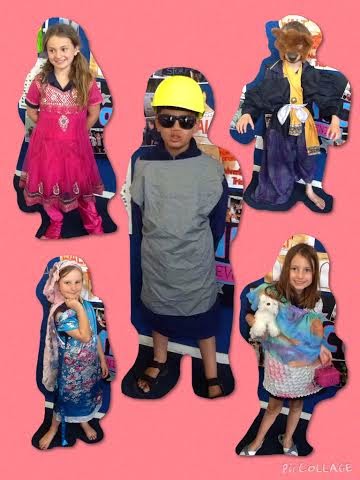 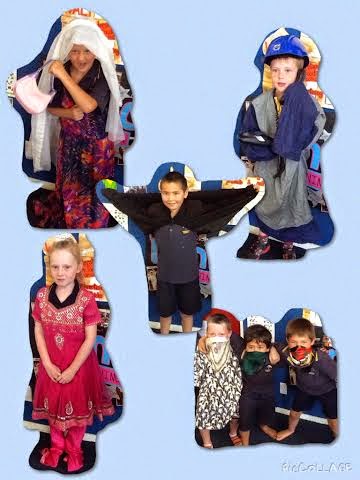 We used the writing skills we have been practising this year to write a character description or a story with the character we created from the dress ups.

I am a poor lady in a blue dress. I have a brown bag with nothing and no money in the bag very very nothing at all. I had skin colour and green old shoes. I walked down the street. I wanted to shop to shop to shop but I didn't have enough money to buyu food to eat the food. I was starving all the way home. Along the way I saw Wonder Woman I was thinking she can bring me food. She flew away and brought some food back for me to eat.
Author Gemma

There is a very talented girl from Ecwescher High School named Rarity! She has white skin and beautiful twisty purple hair. The thing Rarity loves to do the most is making dresses for her friends . She knows a little talking dragon dog loves her. Rarity has her own dog called Lee. Sometimes Rarity steals her sisters name Sweetie Belle. Rarity steals her jewellery. Rarity's eyes are as blue as the sea and with her make up on she looks like a princess! Rarity's house is pink, purple, blue and really light green same with inside. BUT one day Princess Cleslesta came to see Rarity she could not believe her eyes because she was such a big fan. She did what she wanted make her dresses. Would you like a dress from Rarity?

One day I saw an evil grandmother lurking down the shadowy street. Suddenly she flicked around and saw me. Her face was a bears face and her snout was two inches poking out. Suddenly she kicked down the door of the bank so I called her Kungfu Grandma. Se had a scarlet shawl that disguised her bear fur. Her dress came all the way down to her toes. She even kept standing on her dress ans stumbling over.
Blasting out of where the door once stood wit her sacks filled with hundred dollar notes she jumped in a two meter high pram shaped car. It had pink cushioning on the seats. Suddenly an over sized machine gun popped up out of the roof of the pram. "FIRE" shrieked the old woman as she sped out of sight. Speeding down the road came the cops. Who called the cops? Whatever, we now have to get the money back into the bank today ad the wild chase began.

On a strange foggy night a strange person came in the moonlight. He had a night black mask like the face of a bat. A cape that would stretch into jet black bat wings. Some pitch black batamarangs and raven black grappling hooks. He didn't like Superman. His nick name was the Black Knight. His worst enemy is the Joker. When he moves he moves like the wind. He saves people from bad guys. It was Batman. Batman was nearly going to say hi to me until a giant robot that looked like the Joker and the Joker came. He tried to shoot the robot in the tummy so the kryptonite would explode. The kryptonite was the thing that powered the robot machine. When the robot machine nearly shot Batman the batmarangs hit the kryptonite and KABOOM BLAST BOOM went the robot machine. Hip hip hooray. Hip hip hooray.

Walking down the alley I saw an old grandma looking poor. She had a long red dress and an old modernified bandanna. She had sparkly bluey greeny eyes and Harry Potter type glasses that were half way down her nose. The red dress was as red as a rose and went down to her toes. Her bandanna was covered with orange and blue fish. The lady's skin was as white as snow. There were ruffles at the end of her dress she was tripping on while she was walking down the path. The lady's shoes are as black as the night sky when the moon is in its pit. Her eyes were shining in the glimpse of the moon. The grandma's teeth were as yellow as cheese. She reached inside a window and grabbed a bunch of asparagus and a fish, she must have been hungry, then carried on walking. A man was sitting down beside a fish and chip shop. The old lady went up to the man and slapped him on the face really hard. She pulled out a wallet from the mans pocket and walked down the path some more. The old lady was slowing down she stopped at an old deserted college with broken windows and ripped curtains two blocks down from the shop. The old lady started running so I call her THE AMAZING GRANDMA.